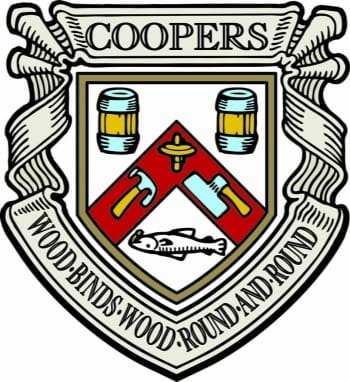 The Incorporation originated along with the Wrights in the ancient craft of the Masons.

In 1569 the Coopers separated from the Masons and Wrights and were granted their own charter. As well as regulating entry to the Craft and making provision for a weekly levy of 1d payable by each craftsman for the support of their poor the charter enacted regulations for standards of craftsmanship. These included a provision that "upon each Saturday at evening, three or four of the worthiest and most perfect craftsmen of the said Craft shall pass and search and visit all men's work to see if it be sufficient and good and able for serving our sovereign lord's lieges or not, and, where it shall be found in fault, the same shall be corrected and forbidden in all time coming, under the pain of escheating thereof". No craftsman was to take more than one apprentice at any one time and the length of the apprenticeship was fixed at no less than seven years. Every applicant for membership had to be of good moral character in a visible way of supporting himself and a burgess of Glasgow.

While the trade protection aspects of the Incorporation are now defunct its charitable and educational functions remain: assistance is given to a number of needy individuals who have a connection with the trade or the Incorporation and the Craft awards prizes to apprentice coopers on completion of their apprenticeship. The Incorporation is delighted that His Royal Highness the Earl of Wessex accepted Honorary Membership in 2008. He has allowed his name to be used for the Earl of Wessex awards, which comprise our annual prizes to apprentices, a scholarship to assist qualified coopers to further their skills and knowledge and encourage innovation, and the support we now give to the Glasgow Sea Cadet Unit.

Close connections are maintained with the Worshipful Company of Coopers of London and we also have links with other Incorporations of Coopers in Scotland. The Incorporation participates fully in the broader work of the Trades House (to which it elects four members).

The History of the Incorporation by Craig Mair was published in 2004. (Copies can be obtained from the Clerk.)

Application forms available from the Clerk. Alternatively you can download a digital copy of the form here.

Payment to be made by applicant on admission.

Near Hand Applicant (If a son/daughter, son-in-law/daughter-in-law of a Member)

If applicant has NO Burgess Ticket £30

If applicant has NO Burgess Ticket £100

Find out more on the Incorporation of Coopers website