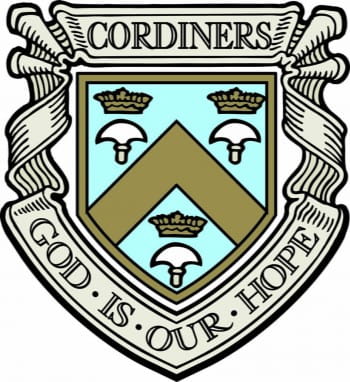 In old Glasgow, boots, jerkins and other leather goods were provided by a group of tanners, curriers, barkers and souters. They adopted the single title of Cordiners (from "Cordoba - workers", i.e. those who worked with the best Spanish shoe-leather) while in due course their ranks were augmented by craftsmen from the Netherlands and France to replace those "slane in the wars".

Following a series of Acts of the Scottish Parliament the crafts gradually acquired greater control of their own affairs and the Cordiners' Minute of Michaelmas 1550 refers to the election by the craftsmen "after the auld wise and consuetude" " of a "Dekin " Auditories, Cersaris of the mercat" and an "Officiar" to regulate their affairs, a situation further regularised by an incorporating Seal of Cause from the Town Council confirmed by the Archbishop as feudal superior of the Burgh in 1558 just before his hurried departure as a result of the Reformation. Seals of Cause confirmed a Craft's power to control entry to the Craft by apprenticeship, the exclusive right to trade in a Burgh and responsibility for the quality of the goods offered for sale as well as the allocation of booths in the market. In 1919 the Incorporation was honoured to receive a Royal Charter. Today it sends 6 representatives to the Trades House.

When the exclusive privileges of trade and burgh election were abolished under the Reform Acts in the last century the Incorporation gave up operative trade membership as a condition of entry. It continues to assist the leatherworking craft where appropriate. It also concentrates on charitable assistance to members and their families, to employees in the trade and to non-state-aided charities.

For more information, visit the Incorporation of Cordiners website.

New members, both gentlemen and ladies, are very welcome. There are no age restrictions on membership, and the gift of membership makes a wonderful and enduring commemoration of a christening or a baptism, a special birthday, or an exam success.

Applicants may apply to join either:

There are three stages involved in joining:

3 Entry Money - the dues of membership for the Craft itself are presently:

Membership is for life, and there are no annual subscriptions.

The total amount for each application then is £146 for Far Hand and £106 for Near Hand.

Cheques should be made payable to "The Incorporation of Cordiners"

Download Forms for a Burgess Ticket: At Near Hand or At Far Hand.

The Clerk will be pleased to process all stages on behalf of any applicant.

Form for a Burgess Ticket: At Near Hand

Form for a Burgess Ticket: At Far Hand