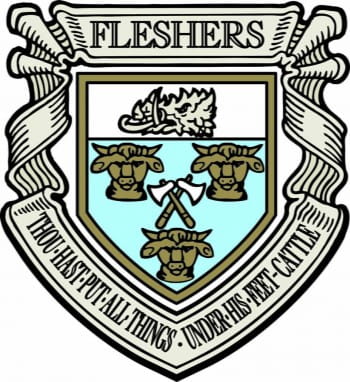 The Fleshers became an incorporation in 1580 to regulate the affairs of those who provided meat for the growing population of Glasgow.

There were "provisions for the inspection of meat, the punishment of malpractices in connection with the selling of same "market dues of unfreemen bringing their beasts to town and provisions against the throwing out of bags, paunches and tripes upon the High Street"plus numerous other rules. Times have changed and control of the meat market was passed over to the City Council many years ago. The trading monopoly of the Fleshers, along with those of all the Scottish Incorporations, was abolished in 1846.

The Craft has preserved its strong links with the meat industry and continues its charitable work for those connected with it. It has a substantial fund for the benefit of needy pensioners and a successful fund raising '400 Club' founded to celebrate the Craft's 400th anniversary in 1980. There is an active service group who organise theatre outings for pensioners.

Like most of the Glasgow Crafts, it elects 4 members annually to the Trades House.

To apply to become a member of the Incorporation of Fleshers please contact the clerk, who will supply you with the relevant application forms.

The Deacon's Choosing Dinner and Dance will take place on Saturday 12th March 2022.

Reduced price tickets at £50 each are available to those who are aged under 25 or over 70 at the time of the Dinner.