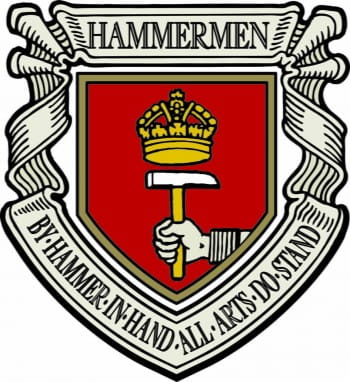 The Incorporation of Hammermen of Glasgow originally comprised craftsmen associated with metalworking – traditionally “men who wielded the hammer”, namely blacksmiths, goldsmiths, lorimers, cutlers, armourers, sword-makers, clockmakers, locksmiths, pewterers, tinsmiths etc. The Incorporation of Hammermen’s crest is a hammer surmounted by a crown, and its motto “By Hammer in Hand, All Arts do Stand”. Today, these “men of the Hammer” embrace every aspect of modern engineering in all its disciplines and, as a consequence of admission of sons of members, many other trades and professions are represented.

The Incorporation is governed by the Master Court which is headed by the Deacon, the Collector and a number of Masters who are elected annually.

The Incorporation today has a membership of over 1000 and during its 450-year history there have been many famous people connected with it, including Kings, Princes, a Princess and Prime Ministers. From the 16th to the early 19th centuries, the majority of members were metalworkers – men who worked with a hammer to fashion their products. However, more recently membership has widened to include industrialists, entrepreneurs, and others for whom the Incorporation with all its traditions has provided encouragement in furthering the trade and commerce of the City of Glasgow.

Find out more on the Incorporation of Hammermen's website.

‘By Hammer in Hand, All Arts Do Stand’

The Craft awards bursaries to students of mechanical engineering at the Universities of Glasgow and Strathclyde, on the nomination of the departments concerned. These are given in the name of Sir William Arrol from funds transferred to the Incorporation in 1997 from the Trustees of the Late Sir William Arrol, an engineer whose best remembered achievement is the Forth Rail Bridge. Similar bursaries in the name of the Incorporation are made to students of Product Design Engineering at Glasgow School of Art.

Those Universities and Technical Colleges within the former Strathclyde Region that offer engineering or other relevant qualifications may, by prior agreement with the Craft, nominate one student for a Hammerman Award worth £300. These award winners are invited to the Trades House in April each year where they are presented with their certificates and awards. The winners are eligible to compete for the Prince Philip Awards.

Two Prince Philip Prizes are awarded each year to the best University and the best College student who were successful in the Hammermen Awards. Applicants are invited to an interview conducted by members of the Master Court. The prizes are worth £1,500 each and are presented by the Deacon at the Deacon’s Choosing Dinner in November each year. Further details and forms of application may be obtained from the respective Universities, Colleges and Further Education Centres or from the Clerk.

At schools in Glasgow, individuals choosing metalwork for their Higher and Standard Grade Craft & Design projects are eligible for prizes awarded by the Craft for excellence in design and craftsmanship. In addition runners up prizes may be awarded if appropriate. These are run in conjunction with the Trade House Schools Competition.

The Incorporation of Hammermen and Scottish Engineering Award

The Craft makes an annual award jointly with Scottish Engineering to an engineer or manger who has shown outstanding quality in the application of knowledge or innovation to his or her employer’s business such as to result in a significant contribution to that business. Further details and application forms from Scottish Engineering, 105 West George Street, Glasgow G2 1QL.

For details on how to join the Hammermen, please go to: http://hammermenofglasgow.org/application-forms/