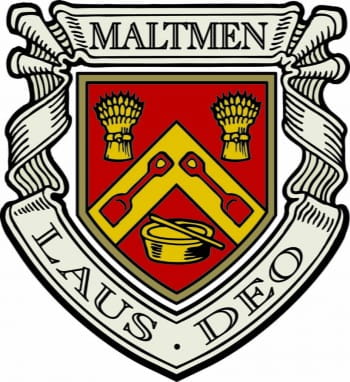 Today's Maltmen represent an ancient craft which goes back to prehistoric times in Scotland. By the 17th century, perhaps the heyday of Scotland's old burghs, maltmen or brewers were well established in every town. Their craft symbol of malt shovels and sheaves of corn can still be found on gravestones all over the country as indeed can those of the other crafts.

Tradition has it that in 1601 the Incorporation's records were destroyed in a great fire (Glasgow was several times ravaged by fire) and so the exact origins of the craft in the city were lost. Nevertheless, it is clear from other documents that maltmen and mealmen existed and thrived in Glasgow long before 1600.

The precise date when the craft became an Incorporation is now lost as the Letter of Guildry granted in 1605 said only that the Incorporation was 'established in remote antiquity'.

Under the Regency of Queen Marie de Guise the elective office of Deacon was regarded by the national government as dangerously democratic and in 1555 the Deacons were removed from the city's crafts in favour of inspectors known as Visitors. Although the deaconhood was later restored, the Maltmen (unlike other corporations) did not re-adopt the title. To this day their chairman enjoys the unique title of Visitor, and sits with 5 other representatives of the Craft in the Trades House. The first Deacon Convener under the Letter of Guildry was Duncan Semphill, a Skipper, whose craft along with the Mealmen was merged with that of the Maltmen.

As with other craft guilds, a major objective of the Incorporation of Maltmen was to protect the livelihood of its members from unskilled competition. The Visitor was empowered to enforce prices, working practices, quality controls, and market hours. He often inspected or 'visited' the kilns and vats of his members. In addition, the Incorporation supervised the training of apprentices, the maintenance of elderly or infirm members, and the support of their widows and children (average life expectancy was only around forty years, although many instances are known of people who lived to the same ages as today). The Incorporation was especially keen to support education in Glasgow. All this was financed from members' entry fees, fines on members who broke trading regulations, the hiring of the guild's mortcloth at funerals, and income from property investments. To this day the Maltmen still try to support needy pensioners and donate regularly to many charities. Their interest in education continues; each year a student in brewing is funded at the Heriot Watt University.

To apply to become a member of the Incorporation of Maltmen please contact the clerk, Thomas Monteith who will supply you with further information and the relevant application forms.