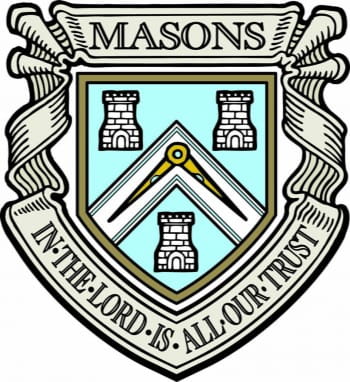 The Masons along with the Wrights and Coopers claim to have been first incorporated by King Malcolm III of Scotland in 1057. Since its origin Craft members have been closely involved with the buildings of a city whose Victorian heritage in particular is now ranked among the foremost in Europe. Whilst still very much associated with Glasgow's thriving building and architectural community, the Masons no longer of course exercise their medieval monopoly.

The Incorporation has maintained its charitable work over the centuries. A significant group targeted for help are needy pensioners who traditionally are visited twice a year by members of the Master Court with gifts of groceries. The Masons and the Wrights each have a Lady McDonald Fund which provides prizes each year for outstanding apprentices in the building trade. Along with the Incorporation of Wrights the Masons have traditionally been asked by the Trades House to provide two lyners to the Dean of Guild Court, originally to help with maintaining building standards, but now to assist in the administration of charitable funds.

The Craft elects 4 members to the Trades House, while on the social side of its activities it maintains its age-old 'Pear Eating' evening, and like many crafts aims to hold an annual dinner as well. Participating in the traditional sporting competitions of angling, golf, bowls and curling is a popular hobby along with members of the other crafts who elect representatives to the Trades House. Albeit claiming to approach the end of their first millennium, the Masons of Glasgow are very much part of the present. Active in recruitment, the Masons number amongst their members the Prince of Wales.

Anyone wishing to join the Merry Masons should click on the above link. Both ladies and gentlemen are most welcome and it could make a great gift to give a loved one a Burgess Ticket making them a freeperson of the City of Glasgow and a member of the oldest Craft in Glasgow.

Elected by the Trade:

To apply to become a member of the Incorporation of Masons please contact the clerk, who will supply you with the relevant application forms.

Find out more on The Incorporation of Masons website.