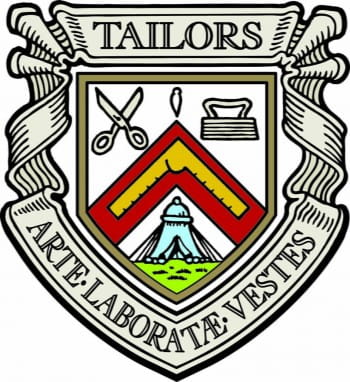 The Tailors were formally incorporated in October 1527 to uphold the standards of the garment making industry in Glasgow.

New members had to pass an entrance test by producing in a locked room "for men one upper coat, one waistcoat and a pair of breeches according to the fashion or for a woman a gown and a petticoat according to the fashion... or a pair of stays if he is a staymaker." The Tailors did their best for several centuries to keep women out of the trade, except for the menial tasks of stitching stays or making buttonholes. There were many rivalries and quarrels - one tailor who was fined for having partners not in the Craft lost his temper and called the Masters "dogs and beggar bitches", for which he lost his voting rights for seven years and had to spend two days in the Tolbooth.

On the credit side the Craft has always done much charitable work for members fallen upon hard times and in 1756 gave out meal and grain to the starving poor of Glasgow during a year of bad harvests. The tradition of looking after needy members of the Craft and their relatives has been maintained and the Tailors are still involved in a number of charitable and educational projects. They retain practical links with the modern garment making industry in the region, and are active in all the various projects of the Trades House, to which they send 6 representatives.

To apply to become a member of The Incorporation of Tailors please complete the application form and relevant Burgess ticket form from the link below. Return to Assistant Clerk, along with a copy of proof of identification and the applicable payment.

Once completed forms are received, they will be forwarded to the Master Court for approval.