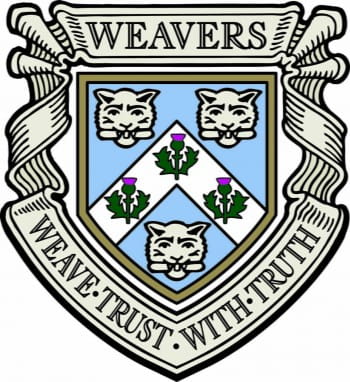 The Weavers of Glasgow date back to the Middle Ages when members of the craft were those entitled to make and sell woven clothes within the ancient burgh. The craft became incorporated by a charter from the famous Archbishop Gavin Dunbar as feudal lord of Glasgow in 1528, but is known to have been in existence at least as far back as 1514. Even in those days, when their main function was to control standards in the weaving trade, the Weavers also had a charitable role "to help and comfort of their decayit brethereine... and other godlie shows". This work has continued right up to the present day.

On 9th March 2014 the Incorporation of Weavers of Glasgow celebrated its 500th Anniversary.

To maintain its links with the modern textile industry, the Incorporation takes a keen interest in the support of promising young people likely to make a contribution to this, important Scottish industry.

To this end it funds a number of grants, scholarships and prizes for textile students at the University of Strathclyde, Glasgow School of Art and Langside and Cardonald Colleges, Glasgow, and also sponsors the Sma Shots Weavers Cottage, in Paisley. In the years 2002-2005 it also funded part of the cost of weaving tapestries for Stirling Castle.

Every year each new Deacon promotes and supports innovative and creative projects to their successful conclusion.

The Craft also makes substantial grants and donations to charities as well as maintaining its pensioners.

Apart from its educational and charitable works, the Craft maintains a long term fellowship of members (male and female) by participation in a number of social and sporting functions and sends four representatives yearly to sit in the Trades House.

To apply to become a member of the Incorporation of Weavers please contact the assistant clerk, Jackie Mullen who will supply you with the relevant information and application forms.