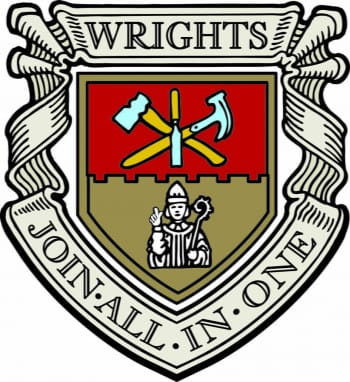 In order to recognise the Craftsmen who were helping to build Glasgow Cathedral at the beginning of the 11th Century, King Malcolm III of Scotland granted the Craftsmen a Royal Charter in 1057. The effect of this was that the governing structure of the Crafts was from then on officially recognised by the state.

This condition continued for many years until a Seal of Cause was granted by the Provost and Magistrates of the City of Glasgow in 1600, the effect of which was to allow the Wrights (who were and still are skilled carpenters) to become a distinct incorporation by themselves. The Wrights had by this time, in fact, become completely independent from their brother Craftsmen (now the Incorporations of Masons and Coopers, being the descendants of those who worked in stone and wood), and the granting of the Seal of Cause helped secure a strong and independent position for the Wrights, as well as granting them a monopoly on all carpentry work in the City of Glasgow. Having not long secured their own independent status, when the Letter of Guildry was granted to the Trades of Glasgow in 1605 the Wrights decided not to join the other Crafts. Had they done so they would be a senior Craft in today's Trades House of Glasgow, but they held back and so are eighth in line of seniority.

In 1846 all the exclusive rights and privileges of trading that had been granted to the Craft were swept away by the Recissory Act, but the Craft members decided not to wind-up the Craft and distribute the funds to the members. Instead the members decided to channel the energy and enterprise of the Craft into the work of benevolence. Over the years since 1846 the Craft has still continued to attract men who are associated in some way with the trade of which its members once had a monopoly, but the old spirit of exclusion has long since gone. Today the Craft's benevolence continues and considerable funds are still distributed each year to the Craft's grantees.

In 1979, the Craft instituted an awards scheme for young carpenters. Promising youngsters still compete annually for this award in which credit is given not only for practical skill and academic distinction but also for completing the work on time in order to emphasise the importance of delivery on time in the modern industry. Three other awards for education are made each year to schoolchildren who have displayed quality workmanship with wood, with yet more grants being considered by the Master Court on an individual basis.

The Wrights are the largest of the Crafts numerically and are represented in the Trades House by the Deacon, Late Deacon, Late Collector and one additional Master.

The Deacon's Choosing Dinner will take place on Wednesday, 5th October 2022, within the Trades Hall of Glasgow. Tickets for this Dinner are available to all members and their guests and are available from the Clerk

New members are very welcome. Applicants may apply to join either:

At the Near Hand if they are the spouse, son, daughter, son-in-law or daughter-in-law of present or late members,

At the Far Hand if they have no such previous connection.

There are three stages to joining the Craft:

Applicants require matriculating with the Trades House, which costs £25.00

Anyone who is interested in joining the Craft should download the attached membership application form and send it, together with the Entry Money, to the Clerk.