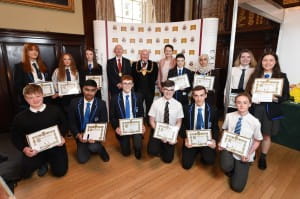 2019 was yet another successful year for the Competition, and was extended to both earlier and later years, which meant that entried were received from S1 to Advanced Higher levels. Entries were judged in Broad General Education, Woodwork, Metalwork, Design and Manufacturing, Engineering Science and Graphic Communications.

The next School Craft Awards Ceremony will take place on Monday 8th June 2020.