On Monday the 24th of February 2020, the Skinners and Glovers faced the Hammermen in the final of the Trades House 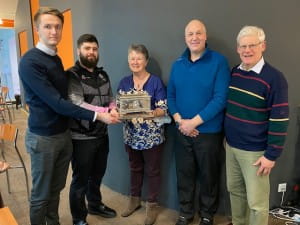 knock-out curling competition, and Andy Callander’s Hammermen’s team of Scott Gibson, Murray Cruickshanks and Chris Evans managed to beat the Skinners, overcoming Skip Jamie Mason, David Bird, Alister Bird and Lisa Mason by 5 shots to 4, with the Hammermen only winning with their last shot at the last end.

The game was indeed a close run thing, as the Hammermen only won two ends against the Skinners 4, but the difference was that the Hammers took a 3 and a 2, whilst the Skinners were taking singles. The 7th end was a well played blank allowing Andy’s team the single shot win.

The Skinners and Glovers route to the final involved the beating of first the Bonnetmakers and Dyers, then the Gardeners whilst the Hammermen 2 got past the Cordiners, the Masons and then their fellow Hammermen before overcoming the Skinners in the final. The Curling Convener’s wife Helen presented the Trophy and the prizes on the night.

Michael Burton, having organised the curling competition for 25 years, is standing down and was pleased to introduce the Skip of the Skinners Jamie Mason, as the new Convener of curling. Unfortunately, with the closing of the Braehead curling facility next season there will be complications with next year’s competition, so Michael and Jamie will work together for the immediate future to ensure a sound transition to whatever format or location is selected for the future. Watch this space!

Congratulations to the Hammermen – and commiserations to the Skinners and Glovers, and we all look forward to whatever next season’s competition will bring..