DC Tom McInally and Gordon Weetch, Deacon of the Incorporation of Masons, were joined by Glasgow Lord Provost Eva

Bolander on 2nd September to unveil a stained glass window representing the Incorporation of the Masons at Glasgow Royal Infirmary.

This is the second in a series of 15 windows to be installed in the hospital. 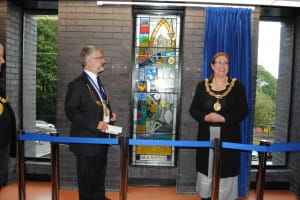 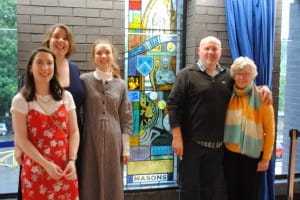 HND 2 students from City of Glasgow College were given a brief and each student initially produced two designs, which were voted on in class and narrowed down to one. These were judged and a winner decided upon. The designs presented for judging are exhibited alongside the completed windows.

The chosen design by Geraldine McSporran was then further developed and created by all of the students, working as a team, within the space of 12 weeks.

It is a wonderful showcase for the vast choice of surface treatments, techniques and glasses available to the modern-day glass artist, all taught at City of Glasgow College.

The first window installed in August 2018 represents the Incorporation of Wrights and was unveiled by Alex’s widow.