The 'Glasgow in London' Dinner

The Trades House “Glasgow in London Dinner” was held in the modern opulence of Haberdashers’ Hall in London on Tuesday 10th September and attended by 160 crafts men and women, most of whom are members of Incorporations who live in the South. 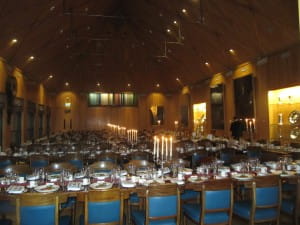 Chaired by Deacon Convener Tom McInally the guests of honour included Sir David Wootton, Past Lord Mayor and London Sheriffs Vincent Keaveny and Liz Green. The Dinner was a splendid way of reconnecting with members in the South and with many members of the London Livery including several current Masters. Late Lord Mayor Sir Charles Bowman, who spoke at the first London in Glasgow dinner, was also a guest.

The Toast to the City of London and the Livery Companies was proposed by Dr Gordon Masterson, Deacon of the 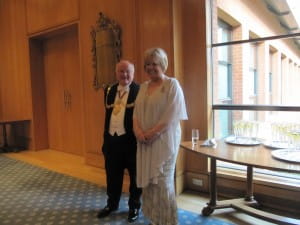 The customary visitation was by the two Sheriffs who joined into the spirit of the occasion with one of the best pinkie dances.

Sheriff Vincent then toasted the City of Glasgow and the Trades House before the traditional exchange of gifts. To finish off the evening Deacon Convener Tom responded to the Toast thanking the Sheriffs for the time to join in on the occasion and for their contribution to the Dinner. He also reflected shared challenges in both Cities and on the work of Trades House and its Crafts that had embraced the need to work with schools in deprived areas of the City.

He gave an insight into the work undertaken by the Coopers, the Govan Weavers, the Cordiners and the Gardeners with local schools and the positive outcomes that had been achieved by these groups as an example of what other Crafts could do.

The importance of the Crafts and the Liveries highlighted by both Sir David and the Deacon Convener focussing on the three S’s Standards, Skills and Social Responsibilities, as the central theme of the evening. They both asked individuals in Crafts and Liveries to realise the opportunity they had to add to the legacies that had been left to them in the development of their communities. 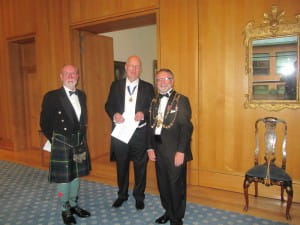 Members were encouraged to get involved with local schools particularly in deprived areas to offer support to our young people maximising their potential and attaining positive destinations.

All speeches were well received by the audience within which there were a number of other influential members of the London Community.

The rights and lefts practices by the Incorporation of Wright’s was held to just 5 interventions, allowing the evening to end on time with the opportunity for a stirrup cup and reconnection with friends in the London Companies.

A vote of thanks was offered to the splendid work or the organising Committee of ex Convener Keith Brown, Joanna Emma from the Company of Glassmakers and a Glasgow Cooper, Deacon Gordon Masterton of the Hammermen and Lady Dorothy Newlands ex Deacon of the Wrights. Thanks was also recognised for the support of Liam Devlin on Piano, Tom Broderick on the Pipes, Tunnock’s treats and the work of the Trades House staff and in particular Janet Olverman for her work on the administration.