The Trades House of Glasgow was created at the time of reform of Glasgow's local government in 1605. At that time the electorate was essentially divided into two groups: the Merchants and the Craftsmen. The Craft Incorporations were led by the Deacon Convener who was given a council seat which is retained to this day, but no longer has speaking or voting rights.

Trades House was established to help protect and support the Crafts people of the City. Over the centuries it housed the Trades Free School for boys and girls, worked closely with educational establishments within the City to support initiatives when appropriate and used Funds built up following donations from generous benefactors to assist those in need.

Trades House is a charity focusing on both Educational Initiatives and supporting people in need. We give donations of more than £750,000 annually to deserving causes and individuals.

To achieve this we have built strong relationships with establishments from nurseries to universities working to motivate and assist those in learning from pre-schoolers to apprentices. We also work closely with third sector groups to ensure the donations and funds we distribute are given to worthwhile causes and the individuals that will benefit the most.

The Trades House still meets in the Trades Hall in Glassford Street, which, apart from the medieval cathedral, is the oldest building in Glasgow used for its original purpose.

The Platform is the group of people who shape and direct Trades House from year to year, similar to a company’s ‘Board’ of Directors. The House is the Governing Body and the members of the Platform are elected by that Body.

Seven people sit on the Platform, each carrying out the seven consecutive roles for one year each. A new member is elected onto the Platform each year, which means it benefits from the experience of those that have sat on it for some time but are invigorated with fresh ideas from the new members.

Members of The Platform 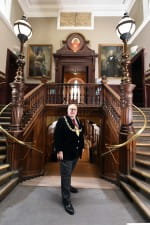 Bruce Reidford recently retired from Tunnocks Ltd after spending 30 years as Company Secretary, responsible for all legal and financial matters within the company.

He is immersed in civic duty and charitable work having been an Elder in the Church of Scotland for 35 years, an Ambassador for ‘Glasgow the Caring city’ and carrying out voluntary work for Alzheimer’s Scotland.

Bruce is an Ex Deacon of the Incorporation of Bakers and served on the House Finance Committee, the Charities Committee and Trades House Burns Festival Committee. 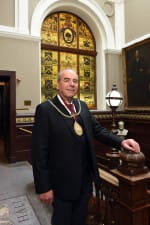 Ewen, an ex-Deacon of the Bonnetmakers & Dyers, has spent his working life in the construction and property industry gaining a Saltire Award with one of his own companies and working with a multi-national as head of Operations in the UK. Always active in the NGO sector, until very recently was Chair of Lodging House Mission a charity dealing with homelessness and deprivation, and has in the past been Chair of the Institute of Administrative Management and President of Junior Chamber Scotland 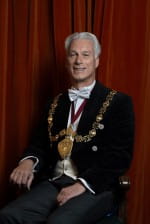 Ken Dalgleish is a Chartered Accountant and Managing Director of Aspen People Ltd, which specialises in executive recruitment.

He is heavily involved in the Glasgow Modern Apprentice Awards at Trades House and has a particular interest in the Education Festival. Ken believes young people have a key role in developing the economic success of Glasgow in the future.

Billy retired from the Wine Trade after spending 46 years servicing the Hospitality Industry at every level. Over the years he has held many senior positions including President of The Institute of Wines and Spirits Scotland, President of the Forty 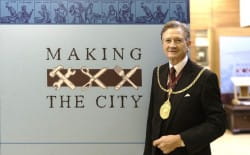 Nine Club ( Scotland’s Trade club) and latterly as Visitor of The Incorporation of Maltmen where he was instrumental in the review of rules leading to the opening of the Craft to ladies.

He has supported several Scottish Charities, either raising funds or by serving as a Trustee, including NSPCC Childline, The RSPB, The Scottish Game and Wildlife Conservation Trust and until recently as Chairman of the HMS Unicorn Preservation Society, the oldest ship still afloat.

He continues to support The Hospitality Industry Trust which identifies emerging talent and took part in staging the highest group Burns supper on Kilimanjaro to raise funds, also playing a tune on his pipes in his kilt at the summit!

Billy is a member of several Trades House committees including Charities, Heritage and Chairs Governance. Trades House very much runs in the family with several members involved. Wife Lorna is a member of the Barbers and currently Late Treasurer of The Grand Antiquity Society and Father-in-Law, Sir Robert Smith served as Convener in 76 & 77. 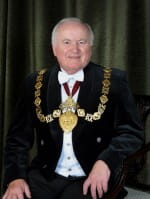 Tom McInally became involved in Trades House as a member of the Incorporation of Coopers in 2006, helping to run many of its charity initiatives and sitting on various committees.

He started his career as a professional apprentice with the Corporation of the City of Glasgow, and since then has been a practicing town planner in Glasgow’s public and private sectors. He helped with planning for the redevelopment of the Gorbals, Darnley, Glasgow Harbour and Central Govan (for which his work was awarded ‘The Silver Jubilee Cup’ in 2014 – the UK’s top planning award). 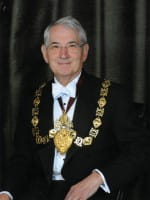 Dr Alistair Dorward was a consultant physician with an interest in respiratory medicine at Royal Alexandra Hospital, Paisley from 1985 to September 2015.

Professionally he has had a wide variety of roles within the Scottish Health Service.

He was Clinical Director of Medicine for 17 years and Lead Clinician for Clyde for 5 years.

Alistair has been an integral part of Trades House’s Kinship Care Initiative and various other projects.

This led him during his year as DC to have “Looking After Glasgow” as his vision.

Having spent the last 56 years in the Scotch Whisky, it is not surprising whisky almost runs in his blood. In 1933, Richard’s Grandfather established W R Paterson Ltd in Glasgow, specialising in Blending & Bottling and Broking. His Bond in Stockwell Lane, a short distance from the Trades House of Glasgow was taken over by Richard’s father in 1956.

Reflecting on his family’s strong ties to the Scotch Whisky Industry, Richard wanted passionately to make his own mark and therefore embarked on a thirst-quenching mission to learn all about it through The Wine & Spirit Education Trust gaining the Higher Certificate with Distinction and ultimately on the Diploma course too. It was during this period in 1970 having spent 5 years with A Gillies & Co, owners of Glen Scotia Distillery in Campbeltown he joined Whyte & Mackay and within five years became their Master Blender, aged only 26, Richard was reputed at that time to be Scotland’s youngest Master Blender, subsequently earing the title “the Nose”, a mark of distinction that has remained with him ever since. Last year he celebrated 50 years with Whyte & Mackay Limited.

In view of his long career in the Scotch Whisky Industry it was only natural he wanted where possible to engage and support The Trades House of Glasgow with the result he became Visitor of The Incorporation of Maltmen and then Deacon of the Incorporation of the Coopers of Glasgow as well as being admitted to both Worshipful Company of Distillers and Coopers of London.

Education has always been one of Richard’s greatest priorities both for the young and old and he was able to pursue this passion, having been Past President The Institute of Wines & Spirits of Scotland, The 49 Wine & Spirit Club of Scotland, Spirit Chairman of both The International Wine & Spirits Competition and the International Spirits Challenge, as well as joining the Management Committee for The Keepers of the Quaich. Having been also a past President of The Scottish Licensed Trade of the Benevolent Society he remains actively involved with the work of raising money for their pensioners and respective charities Something he continues to do when it comes to The Trades House of Glasgow. In the Queen’s New Year’s honours for 2021 he was award an OBE for Services to the Scotch Whisky Industry