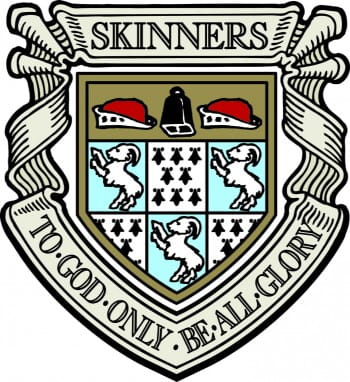 The Incorporation of Skinners & Glovers claims to be the oldest of the fourteen Incorporated Trades of Glasgow, incorporated on 28 May 1516 by the burgh of Glasgow's feudal superior, Archbishop James Beaton, then also Chancellor of Scotland.

In terms of the charter forming the first constitution no one could carry on business as a skinner unless he was a burgess of the city and his standard of work good enough to pass the masters of the Craft. Regulations governing apprenticeship and training soon followed and before long provisions for relieving poverty amongst Skinners, their widows and children were enacted too.

Like many early guilds, the Skinners were originally closely connected with the church and particularly in Glasgow the Cathedral. To this date there is an annual service in the Cathedral, where the Skinners and the other Crafts each have their pew adorned with their coats of arms.

The history of the Skinners through the ages is bound up with the history of Glasgow. They took part in every development and the members were concerned in the good government of the city. From about 1780 the Skinners also took an interest in national affairs and their records show instances of objecting to parliamentary bills, and how they helped raise a battalion of Volunteers for the Napoleonic Wars. In 1799 they sent £200 for famine relief in Scotland, in 1854 £200 for aiding the widows of soldiers and sailors serving in the Crimean War, and large sums for relief schemes in both the wars of 1914/18 and 1939/45. Like the other crafts they have widely ranging membership. The ordinary membership now consists of not only the sons and sons-in-law of members, but also, since 2003, the daughters and daughters-in-law of members, with many families having been represented over generations.

Craft functions today are entirely charitable. The income of the funds is devoted primarily to the relief of pensioner members, their widows and unmarried daughters and contributions are given to many charitable institutions. They are represented in the Trades House by 4 elected members.

New members are very welcome. Applicants may apply to join either:

At the Near Hand if they are sons or sons-in-law, or daughters or daughters-in-law of present or late members,

At the Far Hand if they have no such previous connection.

There are three stages involved in joining:

The dues of membership of the Craft including Burgess Ticket and Matriculation fee are £100.

Application forms are available from the Assistant Clerk: katrina.tilston@tradeshouse.org.uk